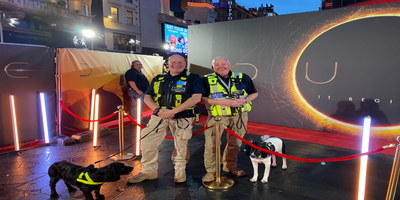 GSS BACK ON THE RED CARPET FOR DUNE

There is nothing quite like being back on the red carpet in Leicester Square for a movie premiere to suggest things are back to normal.

Team GSS was again given that opportunity thanks to our wonderful client Warner Bros. This time for the UK Premiere of the movie ‘DUNE’.

On Monday 18th October 2021 we deployed Explosive Detection Dog Teams to work in partnership with our client’s security partners. As per usual, everything from pre-planning to post-deployment went smoothly.

Big thanks to Doug and his dog ‘Muff’ and Terry and his dog ‘Scooby’ for their usual professionalism and engagement with the attending fans. And of course, Dave Pitt for his planning and oversight on the day.

The movie has been such a critical and commercial success that a sequel has already been commissioned. Those on our team that have been lucky enough to see it already would agree with our client, who pre-deployment described the movie as a ‘visual masterpiece’.