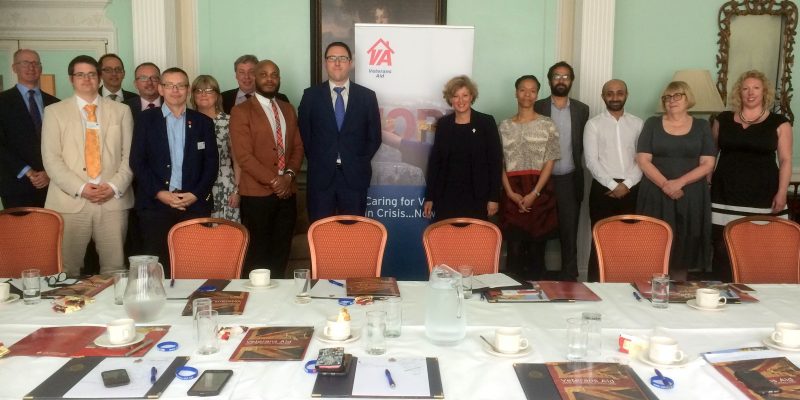 EMPLOYERS PLEDGE SUPPORT FOR VA ‘BACK TO WORK’ RECRUITMENT PARTNERSHIP

Employers with a commitment to helping veterans into the workplace turned out in force at VA’s latest jobs forum. Hosted once again at The Army & Navy Club it attracted around 20 attendees.

VA Development Officer Delia Holdom said, “We were delighted to welcome so many supportive organisations. There were familiar faces from companies that have already provided opportunities for our clients, but it was heart-warming to meet representatives from new organisations who have expressed an interest in working with us.”

Last year Veterans Aid helped get 62 veterans into work or on work placements and funded 72 training courses at an average cost of £582.

CEO of Veterans Aid Dr Hugh Milroy said, “We are so grateful to the employers who have worked with us from the outset to get veterans back on their feet – Timpson, Global Support Services and Wates for example have been trailblazers. Working in partnership with them we are helping to give the Armed Forces Covenant meaning. But the real reward is seeing how some of our formerly homeless clients are now thriving; one has already been nominated as an Employee of the Month.”

Among the newcomers expressing interest in providing employment for VA nominees were TfL, Wilson James, Skanska, McGinleys, A Fairer Chance and the NHS. Established partners from Deploy, Silverhill Consulting joined Wates, Timpson and GSS delegates to discuss their experiences of the partnership and learn more about how the charity operated.

VA’s dedicated development service is part of its commitment to take veterans who have been in crisis beyond the welfare system to the point where they can sustain rewarding independent lives.

“Ex-servicemen and women are no different from anyone else” said Dr Milroy after the event. “They need homes and they need jobs and while VA is not an employment agency it is committed to ensuring that those veterans who have been in its care leave with the tools to sustain themselves.”

VA’s commitment to getting veterans back into employment is part of an uninterrupted 85-year tradition. In 1932 it recorded having cared for “painters, doctors, plasterers, stockbrokers, miners, schoolmasters, chauffeurs, journalists, news-vendors, bricklayers, bank officials, dockers, civil engineers, small tradesmen, and clerks – to name but a few.”

The range of jobs, training and educational opportunities that VA is able to offer is growing weekly. Any organisation interested in attending a VA Back to Employment Forum or learning more about working with VA to employ an ex-serviceman or woman should contact Delia Holdom on eandev@veterans-aid.net.