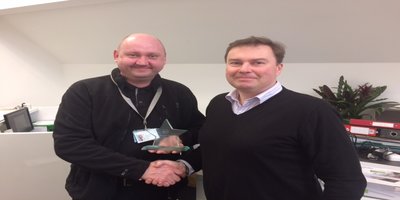 In yet another tightly contested couple of months, we identified not one, but several great examples of Billy & Steve truly living our company values of reliability and teamwork.

In seeking to ensure that our clients were provided with a quality service at all times throughout December and January, both Billy and Steve agreed to cover shifts for colleagues for both planned and short-notice absence on numerous occasions, while (in Billy’s case) working to overcome several highly time-consuming and distractive issues related to licence renewals and compliance.

Both guys successfully met all expectations placed on them while maintaining complete professionalism throughout the month.

They are awards that are well-deserved and have been really well received.

Commenting, Gary Malloy said ‘Billy has been highly diligent through the month and many within our Head Office have commented on his responsiveness to communication and instruction and his always positive demeanour. I’m personally delighted that both Billy & Steve have received this recognition by our Senior Management Team.

Steve is a similar sort of character, he is ‘Mr Dependable’ and goes out of his way to support the business in any way he can and is well liked and respected by our whole team – especially our Canine Trainer Dave and our Scheduling Dept., who often comment on Steve’s enthusiasm’