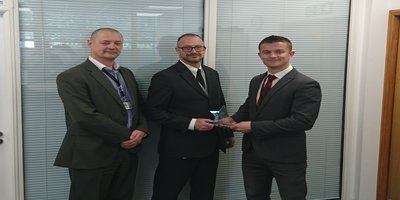 We are delighted to announce that the GSS Superstar of the Month Award – April 2017 is awarded to our colleague Phil Lacey.

Phil has been with GSS for almost a year now and for the length of his employment with us, has been deployed at our client Bentley Motors in Crewe.

Phil is recognised through this award as embodying our core value of Striving for Excellence in terms of the level of diligence displayed during a recent routine patrol. While on said patrol, Phil identified and subsequently reported a strange noise emanating from our client’s central server room. The noise was quickly investigated and identified as being a precursor to the server over-heating. The identification and subsequent investigation of the noise averted over-heating and avoided the obvious complications and significant expense that a malfunction may have caused to our client.

Commenting on this award Terry Finlay – Operations Manager said ‘The level of diligence shown by Phil is typical of his behaviour. He is highly conscientious in all that he does and was praised for his actions in averting the server room issue by senior stakeholders within our clients business. Well done Phil!!’

If you would like to learn more about career opportunities with GSS, head to our recruitment portal to find out more.