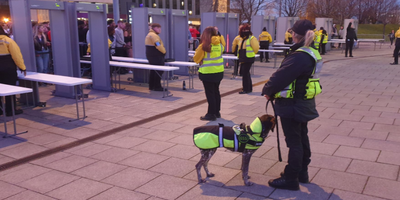 Shouting about the regular amazing things our teams do on behalf of our company and clients when going about their duties is easily one of our favourite things to focus on. On that basis, we’re delighted to announce the GSS Superstars of the Month for March and April 2022…

Tracey joined our team mid-2021 primarily to bolster the detection dog team support across our venues and events portfolio. Nominated by our Ops Manager for Venues and Events – Jason Lennox, it was difficult to narrow down the superlatives and link Tracey’s performance of her duties to just one of our company values. Still, in doing so, Tracey is recognised through this award as living our company value of ‘Strive for excellence’.

Speaking of the nomination Jason Lennox said “In a short space of time, Tracey has become one of our go-to team members because of her dedication to professionalism, excellence in communication (including some of the most comprehensive post-deployment debrief reports we have ever seen) and undoubted team-leadership skills. Tracey is a great asset to our team and a wonderful ambassador for all that is good in the private sector detection dog world”

Nick joined our team in September 2021 and works as an important component part of our arenas and venues team at a number of live entertainment venues across the northwest, midlands and Yorkshire. In a unanimous nomination, Nick is recognised via this award as living our core value of ‘Teamwork’.

During a recent high-profile music event, Nick was part of the initial response to reports of an individual, behaving erratically, and subsequently found to have a bladed weapon on his person. Nick was first on the scene and safely detailed the individual until Police support arrived and the individual was detained under the mental health act. The discreet manner in which the individual was detained and securely removed from the venue meant no distress was caused to any member of the public attending the event. Nick was subsequently thanked in writing via GSS, by the commanding police sergeant at the event, who praised Nick’s actions in keeping the individual calmly detained and engaged until their arrival.

The GSS Superstar Award has become an integral agenda item of our monthly senior management meetings, during which each member of our senior team puts forward a case for nomination. While the debate is constructive and usually fun, the final selection is never (usually!) easy, as there are always award-worthy examples of our team members exceeding the standards expected of them. So, while we can only issue one award each month, we want to sincerely thank all members of our team for their continued support and hard work for our valued clients.