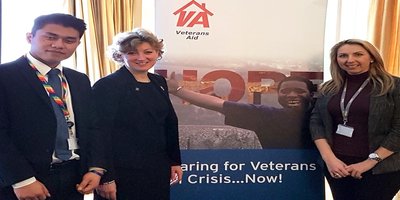 GSS AT THE VETERANS AID ‘BACK TO EMPLOYMENT’ FORUM

Veterans Aid held its second Back to Employment forum at The Army & Navy Club on Tuesday, 21st March 2017.

Attended by our MD Daniel Mailly, the day was an informal exchange of information between established partner companies and new ones, the event provided an opportunity to discuss best practice, communication issues, and the complexity of VA’s work with veterans in crisis.

A key part of the charity’s work is the last stage of its Welfare to Wellbeing pathway, which involves ensuring that those who have been helped to address their respective problems are then able to sustain rewarding, independent lives.

CEO of Veterans Aid Dr. Hugh Milroy said, “It can be hard for individuals to get back into employment when their confidence has been undermined by homelessness, debt or relationship problems and the charity greatly values the support of organisations willing to invest in them. This scheme adds more strength and depth to an already highly effective national system.”

Delia Holdom, VA’s Events & Development Officer, said, “The endgame of VA’s Back to Employment scheme is to give veterans financial independence, but within a support structure that bolsters self-esteem, factors in development opportunities and manages expectations.”

The next forum is planned to take place in June, when new companies who have already expressed interest in helping will be introduced to the scheme.