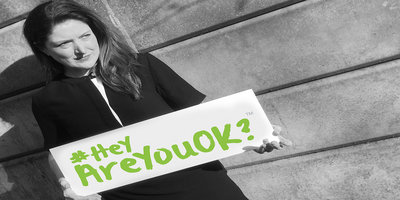 ‘Hey, are you OK?’ Four easy words at the core of a campaign aimed at the heart of communities, workplaces and schools. The #HeyAreYouOK? Social Change Campaign, aiming to improve attitudes and culture in response to stress and distress, comes from the team at STORM® Skills Training, a not-for-profit social business.

The two-hour workshop, delivered by Dr. Gill Green at the GSS headquarters, provided a great opportunity for the team to learn about and reflect on the three steps of the #HeyAreYouOK? campaign:

2. Look out for each other.

3. If you feel able, offer help and support.

“Gill was incredibly knowledgeable and able to deliver her knowledge in a seamless way.  All staff were fully engaged and opened-up in a way I’d not seen before. The three stages of the campaign were simple to understand and follow. The workshop allowed me to consider my own state of mind as a starting point, which was a powerful message.”

The #HeyAreYouOK? campaign is about challenging the fear of talking openly and honestly about how stressed or distressed we feel.  To change the culture of silence, we first need to open the conversation, which is exactly what was achieved on the day, reported GSS Risk Director, Leigh Gillon:

“The workshop involved an extremely useful discussion about everyday problems that everyday people face. From my point of view, people live their lives inside two bubbles, their private lives and their public lives. For me, the aim of the campaign isn’t to interfere into your co-workers’ personal lives but to help recognise the signs that can make you aware that they may need support, advice, or just a friendly chat. The workshop made me realise that because the world is so fast paced, every now and then we need to stop, take some air and be conscious of how those around us in our workplace are feeling…”

The campaign stems from STORM’s long history of work around suicide prevention.  The team wanted to have an earlier impact, before suicide becomes an option. They developed the #HeyAreYouOk? campaign to help change attitudes to stress and distress, which if left unacknowledged can lead to thoughts of suicide.

In these times, we are becoming increasingly aware of the economic and personal impact stress has; we also know that the highest rates of suicide are seen in males aged 45-49 and most men of this age are in the workplace.   It’s very powerful to think that four simple words, ‘Hey, are you OK?’ can have such an impact.

To learn more about the campaign or find out what opportunities are available to your team , visit http://www.stormskillstraining.co.uk/ or follow the campaign on twitter.