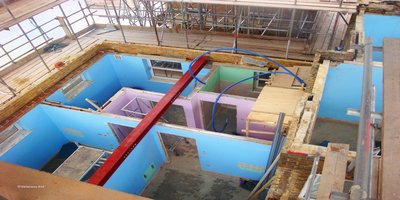 Take away the prefix ‘youth’ from ‘hostel’ and the image conjured up is not usually an attractive one. Those who have spent time in temporary accommodation for the homeless describe noisy impersonal places where people down on their luck seek refuge only from the even bleaker prospect of living on the street.

A former client at Veterans Aid’s ‘home’ (sic) for ex-servicemen described one he had spent time in as ‘reeking of marijuana, stinking of piss and noisy as hell’.

The £8.2m rescue and redevelopment of VA’s New Belvedere House is an investment in something that will rewrite the manual on ‘hostel living’. Gleaming state of the art training kitchens, computer suites, a professional standard gym/fitness centre, thoughtfully equipped study-bedrooms and public areas where the interplay of light, colour and space provoke impromptu smiles . . . complemented by a move-on block of semi-independent living units, the ‘new look’ New Belvedere House will be bigger, brighter and better.

The hostel enjoys a success rate of around 90% – lives that are turned around tend to stay on track. But that’s no accident. Veterans who are admitted with nothing leave with hope – a network of reliable friends, a training course or two under their belt, the prospect of a job and a new home. There are failures of course, but they are few and untypical.

Funding the build has been the biggest challenge in VA’s history – a huge ask for an organisation with no marketing department, employing just 25 people and until recently no in-house fundraising manager. Since the present hostel opened in the 1970s it has helped more than 700 homeless, or potentially homeless, veterans; it has given them hope, a reason for living and the tools with which to do it.

Each stage of the refurbishment has been followed by a sigh of relief and expressions of wonder, but the last part of the project is not a rebuild, it is an extension. The building is, literally. ‘going up’. The picture above shows a bird’s eye view of the planned expansion; in the months to come it will take shape leaving only interior spaces to be painted, furnished, equipped and occupied.