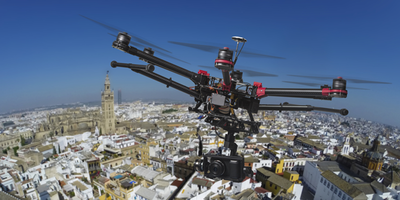 A substantiated threat, problematic already in hostile environments – the era of Ab-IED (Airborne Improvised Explosive Devices), albeit not yet officially titled!

Last week the RAF decommission a site in Mosul used by ISIS to manufacture airborne improvised explosive devices (adversary drones) and coalition forces report witnessing a drone each day for the month of Jan 2017.

Colonel Richard Kemp, who has advised the Government on terrorism, stated: “There is a genuine threat from Islamists wishing to deliver high explosives by drone to crowded areas. The effects could be devastating.”

Changing the dynamics of security risk management, consideration and responsive measures should be implemented to this fast-emerging threat.

Who will this affect?

Simply, all security personnel (examples below but not limited to):

Blast protection at height – considerations for above ground detonation

The government and relevant agencies are currently engaged with testing counter UAS systems, albeit these are likely to be deployable only by the military and police forces only, initially anyway. Current legislation prevents the use of particular countermeasures and further protects UAS from physical interference within aviation law, it is anticipated that regulatory bodies and enforcement agencies may need to offer exemption and/or licenses to accredited organisations in the future, in order to effectively react to an adversary UAS.

Many manufacturers are engaged with increasing safety by Improving software such as Geofencing, preventing UAS from entering a predetermined area autonomously and the introduction of a registration process in order to purchase a UAS. This, however, won’t make much of an impact against hostile potencies (when considering current terrorist agendas, such as ISIL) as marketplaces such as eBay and Amazon are flooded with all the parts required to fabricate and programme a self-build.

UAS technology is rapidly improving, the availability of UAS is excessive with some relatively inexpensive aircraft now offering:

There are UAS available that significantly exceed these specs, albeit at a cost, however, they are available. The statistics stated above should provoke security awareness and appropriate responses, this should be included in contingency drills ranging from privacy penetration through to detonation or release of Chemical, Biological, Radiological, Nuclear and Explosive (CBRNE) substances.