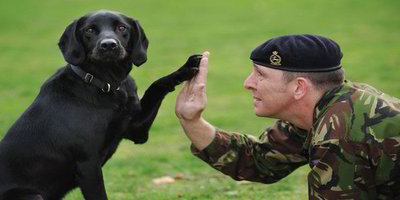 We are pleased and proud to announce that Dave Heyhoe, our Lead Canine Trainer has been nominated for the Soldiering On Awards Animal Partnership Award.

The winner will be announced at the 2017 Soldiering On Awards on Friday, 24 March in London.

Dave Heyhoe, our Lead Canine Trainer, is an ex-military working dog handler and his canine partner Treo, an arms and explosives search dog, together saved many lives during their tours in Afghanistan. But their work didn’t stop there. After coming out of the British Army in 2009, Dave and Treo gave talks at schools and supported various military charities. In 2010, Treo was awarded the Dickins Medal, considered the equivalent of a Victoria Cross for animals. Sadly, Dave lost his partner in October 2015. However, he is setting up a memorial in memory of Treo and in recognition of the great work and sacrifice by all military dogs.

We hope you will join us in congratulating Dave on this prestigious nomination and wishing him the best of luck in hopefully picking up this award.

For information on the ‘Soldiering On Awards’ or to find out about the other worthy Animal Partnership Award nominees, visit: http://www.soldieringon.org/